We are honored to have Donald Davis, a master story teller, continue to take the helm as the Expert-in-Residence at The Swag, a luxurious mountaintop hideaway bordering the Great Smoky Mountains National Park.  Donald is a “local boy” having grown up just down the road from The Swag in Waynesville, North Carolina.  In fact, he frequently hiked what is now The Swag’s property before it was “the potato farm that became an inn.” 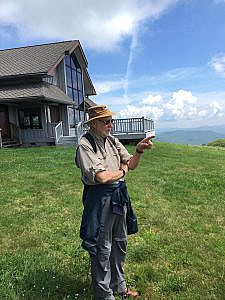 When Annie and I honeymooned at The Swag in 2011, Donald Davis was also there.  Growing up in the hills of Haywood County, Donald has said, “storytelling was just a part of life.”   After 25 years spent as a Methodist Minister, Donald became a full-time, professional storyteller and has been on the storytelling circuit for over four decades.

In addition to making guests laugh, reflect, and occasionally tear up after dinner, Donald led wonderful hikes throughout the week.  He knows the history of our forests inside and out, and can easily recount the tales of the locals and the various groups that used the mountains of Western North Carolina to take refuge: the Cherokees, the Scots-Irish, Civil War soldiers, and more.  Donald led hikes to the top of Hemphill Bald; to the Appalachian Highlands Science Center at Purchase Knob; to the Ferguson Cabin; and along other trails, pointing out interesting sights and telling wonderful stories along the way.

In a 2006 interview, Donald stated: “Story is really about identity; it’s about identity maintenance; it’s about who I am. A community of people and their relationship to one another is not about where you work. It’s who you are, where you live, and from whom you have come. So, if you go to a cocktail party and all the conversation is about work, you’re not in a community. If you go to a cocktail party and the conversation is about family, about how’s your mama, where are your children, and how are they doing, you then have a community. Community connects people with these things: where you live and to whom you’re related and from whom you came. Community doesn’t connect people in terms of where you work. Community creates a sense of kinship, and we’re akin to people with whom we share common experiences. As soon as you hear somebody’s story, it reminds you of something you did like that, of somebody you know who’s like that, of a place you’ve been that’s like that. You’re then in a community together.”

We believe The Swag is so special, in large part, because of the community that it fosters among the guests, the staff, and experts-in-residence.  We are so glad that Donald Davis has been a part of that story (and our story) for so many years.  So book your room now and come hear Donald…you will not be disappointed!

A sampling of additional coverage of Donald Davis can be found in the Raleigh News & Observer; Salt Lake City Desert News; and Smoky Mountain Living.