Did you know that there are 65 mammal species in The Great Smoky Mountains National Park?  The most famous, of course, is the black bear, but we also have elk, red and grey foxes, raccoons, river otters, raccoons, and more.  We are extremely blessed to have the experts on southern Appalachian mammals, Dr. Michael Pelton and Dr. Tamra Willis, back at The Swag this season to serve as Experts-in-Residence. 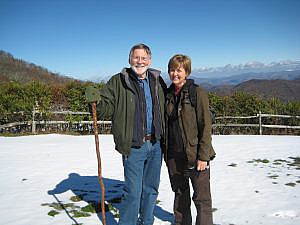 Michael Pelton is Emeritus Professor of Wildlife Science in the Department of Forestry, Wildlife and Fisheries at the University of Tennessee is the foremost expert on the black bear in the world. His research, among “the most ambitious ever undertaking in the eastern U.S., lasted 41 years to become the longest continuous study of any bear species conducted anywhere in the world.”  In addition to the black bear, Michael has researched giant pandas in China, brown bears in Spain, Andean bears in South America, and Asiatic black bears in Japan.

Michael has numerous academic achievements, including winning the Caesar Kleberg Award from The Wildlife Society. The award “is bestowed for a body of work in applied wildlife that responds to or has potential application to high-priority needs in wildlife management and conservation.” The Wildlife Society declared, “[T]he sustained record of productivity on basic and applied research of Dr. Mike Pelton on common as well as high-profile species was carried out during his 40+year career. His widely published findings along with his relentless efforts to educate not only professionals but the public by forming collaborative partnerships and organizations, led to recovery and improved management of imperiled species, those in need of management, as well as more common species.”

Tamra Willis, Michael’s wife, has serves as the associate professor in Graduate Teacher Education Program at Mary Baldwin University, where she directed the Environment-Based Learning program.  Over her career she has served as an elementary classroom teacher, science coordinator, and environmental educator.  Tamra’s area of interest include snakes, bats, and insects. Michael and Tamra now live on a farm in Virginia.

Each morning, Michael and Tamra lead interested guests on one of the many beautiful hikes in The Great Smoky Mountains National Park or The Swag’s 250-acre property. Before hors d’oevres, Michael and Tamra leads discussion in The Swag House on the black bear and other mammals in The Great Smoky Mountains National Park.  Our son, Will, loves getting to sit in on these discussions.  Will recently asked, “So what does a grey fox actually do?”

We were lucky to have Michael and Tamra with us for our Halloween celebration.  Although their status as Experts-in-Residence disqualified them from taking home one of the prizes in the costume contest, Willie Nelson and Emmylou Harris would have been tough to beat otherwise!

If you love hiking or learning about the Great Smoky Mountains National Park, you will want to come spend time at The Swag with Michael and Tamra. Book your room now!